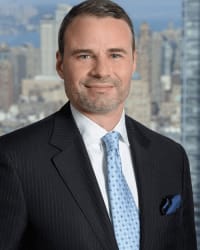 Edward V. Sapone is a founding partner of Sapone & Petrillo, LLP. He concentrates his practice on federal criminal defense and white-collar litigation. Mr. Sapone has spent his entire career defending people and corporations accused of crimes.

As lead trial counsel, Mr. Sapone has tried an extraordinary number of cases throughout the last 20 years. He has gained acquittals in federal courts for clients indicted for the most serious crimes such as multi-million-dollar fraud, structuring financial transactions, conspiracies, large-scale narcotics trafficking, hostage-taking, kidnapping, alien smuggling, and other offenses.

He also has consistently won in state court—from the most severe murder cases to trials including the assault of CIA agents protecting Barbara and Jenna Bush, wife and daughter of U.S. President George W. Bush, and other crimes. Mr. Sapone also has negotiated hundreds of dismissals, deferred prosecutions, and other favorable resolutions for those clients who did not wish to proceed to trial.

Mr. Sapone has routinely represented high profile clients too. Some examples include a target of the federal NXIVM Sex Cult prosecution in the Brooklyn Federal courthouse (prevented prosecution); a lead defendant in the Lesandro “Junior” Guzman-Felix Bronx Trinitarios machete homicide prosecution (relieved as counsel due to federal trial); a lead defendant in the largest gang takedown in NYC history by 700 agents who arrested 120 defendants who were prosecuted in the Manhattan federal courthouse; client was indicted for murder, RICO, narcotics, and for firearms offenses that carried a 45-year mandatory minimum sentence; when the case began the client faced a mandatory life sentence for the murder; client admitted to the murder and to being a leader of the RICO who trafficked drugs and possessed guns (ultimately achieved sentence of only 14 years); the “El Muñecon” prosecution in Puerto Rico federal courthouse involving thousands of kilograms of cocaine and other controlled substances and a $100 million forfeiture; when the case began the client faced a life sentence (ultimately achieved plea offer of 15 years eight months); a $50 million trademark counterfeiting, commercial bribery and tax investigation in Nassau County, NY, and a $50 million forfeiture stemming from counterfeit cellphones imported from China (prevented prosecution in state and federal court and negotiated the return of $35 million to client); a $29 million federal tax fraud case prosecuted in the EDNY Central Islip federal courthouse; capped maximum sentencing exposure at only 36 months (client served only 10 months in BOP camp); a $70 million Nike Air Jordan counterfeiting conspiracy in the Manhattan federal courthouse (achieved time-served sentence of six hours with supervised release); an honest services fraud, public corruption, mortgage fraud and tax prosecution of a Yonkers City Council Member in the Manhattan federal courthouse involving official action voting in exchange for cash bribes (retained for sentencing when government sought 17-year sentence; achieved downward variance from chief judge to 6 years); a San Diego federal prosecution that piggy-backed the BALCO professional athlete steroid scandal; client was a medical professional who was importing from China and Mexico the raw materials to make steroids; then made and distributed steroids (ultimately achieved sentence of probation); and many multi-million dollar healthcare fraud and money laundering prosecutions in the Manhattan, Brooklyn and NJ federal courthouses.

Mr. Sapone represented Sou El Flotador, a Regatón music sensation (large-scale narcotics importation); a Yonkers City council member (public corruption); and the captain of a vessel that contained thousands of kilograms of cocaine captured by the U.S. Coastguard—all in the Manhattan federal courthouse, and all receiving drastic downward variances from the otherwise draconian federal sentencing guidelines.

Having successfully defended hundreds of criminal defendants, Mr. Sapone received Citations of Honor by the Queens Borough President (2009) and by a N.Y. State Assemblyman (2011), and a Proclamation of Honor by a N.Y. State Senator (2010 and 2014). Mr. Sapone has also been recognized by VerdictSearch's Top New York Verdicts of 2010 and by Super Lawyers every year from 2014-Present.

Mr. Sapone has taught advanced trial techniques and federal practice to thousands of lawyers. He has mentored more than a dozen law and university students. He teaches at the Manhattan federal courthouse annually.

Since the coronavirus shutdown, Mr. Sapone wrote the course curriculum for, and recruited 19 lawyers to teach, a 10-week, 15-hour federal practice CLE series. During this time, Mr. Sapone has been invited to serve as a panelist who has taught other criminal defense lawyers five continuing legal education seminars. He has moderated six of these seminars focused on federal practice and trial practice, and they attracted more than 1,000 remote attendances.

Having represented corporate CEOs and Wall Street broker-dealers, Mr. Sapone also has been invited to lecture for the Association of Certified Fraud Examiners.He is often sought to share his extensive knowledge of criminal law with the public. He has appeared as a legal analyst on CNN, Headline News, Court TV, MSNBC, Fox 5, and TRUTV.

Mr. Sapone is fluent in Spanish. He has represented hundreds of people from Central and South America and the Caribbean. He has appeared as a legal analyst on Telemundo and Univision, as well as on international Spanish radio.

Mr. Sapone was born, raised, and educated in New York City. He received a B.A. from Fordham University. He then attended law school at night while working as a full-time criminal defense paralegal during the day. He earned a J.D. cum laude from New York Law School, where he was an Editor of the International and Comparative Law Journal, and a Member of Distinction of the Moot Court Association. He completed externships for a N.Y. Supreme Court Justice in 1997, and a Chief of the Criminal Division of the Bronx DA’s Office in 1998. Mr. Sapone was also a contributor to the Suppression Law section of the 1998 Bench Manual relied upon by New York State trial judges.