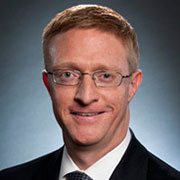 litigation. A former shareholder at Davis, Cedillo & Mendoza, Inc., he has

represented both plaintiffs and defendants in commercial disputes involving

domestic and foreign corporations. Since 1999, Mr. Chiscano has played a major

companies and over $33 million in judgments or settlements for U.S. companies.

He also has successfully defended commercial cases for both U.S. and foreign

corporations in excess of $1 billion in claims.

Mr. Chiscano is admitted to practice in the State of Texas, as well as the Western and

Mr. Chiscano graduated from St. Mary’s University School of Law in 1997. He received

of Texas at Austin in 1994, majoring in International Business and Spanish. Mr. Chiscano

is fluent in Spanish.

Texas Bar Foundation (Fellow), and the State Bar of Texas. Mr. Chiscano has been a featured

Association. He is actively involved in the San Antonio community sitting as chair of the

Historical Centre Foundation, board of trustee member of St. Mary’s University, chair and

board of trustee of San Antonio Academy, board member of the Cancer Therapy & Research

Center (CTRC), and current board member and past President of St. Mary's University