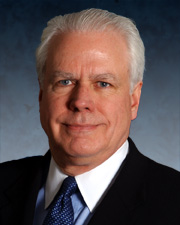 Michael A. Pope is a trial lawyer who provides legal counsel on matters related to product liability, consumer fraud and complex business litigation.

Michael has tried complex jury cases to verdict around the country for almost 40 years. He has recently represented numerous Blue Cross Blue Shield plans in an Employee Retirement Income Security Act (ERISA) class action in Chicago, and Syngenta Crop Protection in two class actions filed in Central Illinois. He has also represented McDonald's in a multi- district litigation (MDL) action involving the marketing of its French fries, as well as Coca-Cola, ExxonMobil and State Farm in commercial class actions in Illinois.

Michael is active in alternative dispute resolution and serves as a mediator and an arbitrator on major disputes involving complex business litigation and professional liability disputes. In 2012, he was appointed by the Illinois Supreme Court to its Commission on Access to Justice. Michael is also active in pro bono and community activities.

Secured a jury verdict in favor of Leprino Foods Company in Federal Court in Denver, Colorado, in an insurance coverage dispute with Factory Mutual Insurance Company over an All Risk property policy in which the insurer had denied Leprino’s claim after approximately eight million pounds of its cheese was damaged in storage; at trial, the jury found the loss to be covered under the insurance policy and awarded a verdict that, with interest, resulted in a return to Leprino of approximately $25 million—the Tenth Circuit Court of Appeals affirmed the jury verdict

Defended Syngenta Crop Protection, a herbicide manufacturer, in two purported class actions brought by community water systems in Illinois concerning the sale of Atrazine to farmers, and its presence in the groundwater used by the water systems; a favorable settlement was obtained on behalf of Syngenta